Alrighty, so, first of all, thanks for clicking~!

I’ve had to rewrite this quite a lot of times, as I kept making new discoveries (And old ones were proven wrong, and the sort), but now I think this is close to the best I can do.

I hugely appreciate every last tidbit of help or advice!

On my own, I’m kinda stuck here, for now.

- 2D/3D (Either produces the same result)

These are my two lovely error messages I’m getting:

After a lot of inspecting and testing out, I thought I had finally figured out a pattern in the error, being the Antivirus error popping up once after turning Avast Antivirus, then being replaced by the IP Address error.

However, it turns out that doesn’t quite seem to be the case, as the IP Address error will sometimes pop up instead of the expected Antivirus one.

Something I have found out, though, is that if the Antivirus error doesn’t pop up, it’s the IP Address one, so I’m thinking the IP Address one is sort of like a “last line of defense” (If that makes sense, didn’t know how to explain it differently ^^’).

Additionally, it seems whenever I “Quit Unity Hub”, then reopen it, the version I used when creating the projects is shown as “Unavailable”:

WHAT HAVE I TRIED?

- Reinstalling Unity Hub (And with both Firewall + Avast Antivirus off)

- Running Unity Hub as Administrator (And with Firewall + Avast Antivirus off)

- Adding “UnityPackageManager.exe” to the built-in Windows Firewall’s list of programs that are allowed through it (Now I have 7 “Node.js:Server-side JavaScript”s on the list of allowed programs, which is a little strange)

-Adding the following to my Avast Antivirus’ list of files/folders/websites to exclude from its shields/scans:

WHAT I THINK MAY BE POSSIBLE REASONS

- I am unable to use my Product Key to activate Windows (Windows 7 Professional as the version, and it’s a long story), thus my Windows copy hasn’t been confirmed to be legitimate

(Maybe that has an effect on this whole thing?)

- I am positive it has something to do with Unity 2019’s newer Package Manager (I think I’d read that there was a change from the previous version), as 2018 opens totally fine

-Unity Inbound Rules (Please don’t mind the German, I assure you they’re all activated and set to “Allow Connection”) (Also, those are quite a lot of the same rules, maybe that has something to do with it, but in that case, Unity probably would have worked the first time, I suppose?) 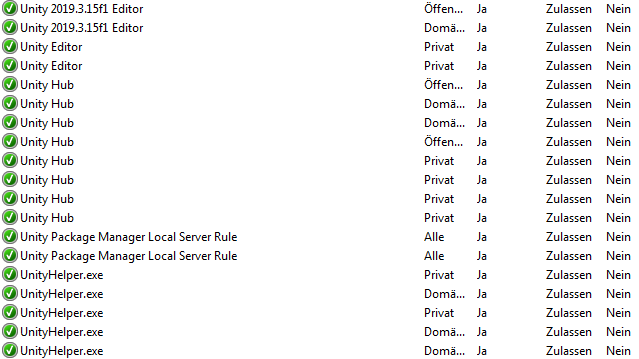 -Self-made Inbound Rule for IP Address (Note: I haven’t deleted the original, already-made rule yet (Of which the one I’ve made is an exact copy), so maybe I need to do that?) 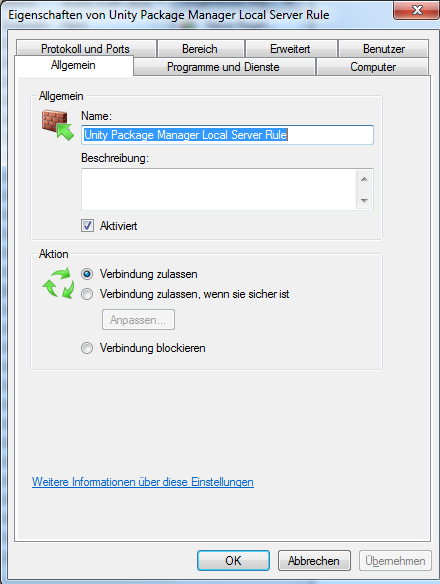 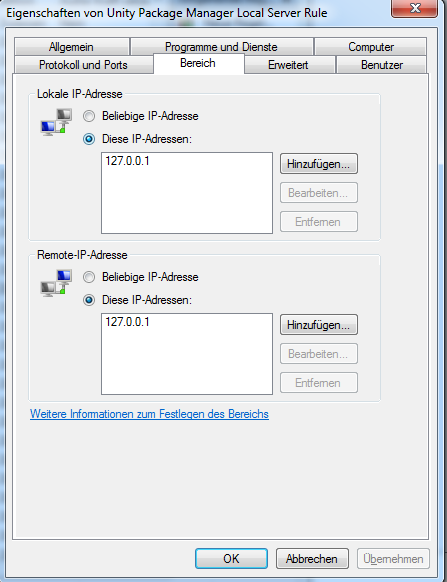 Apologies if I’ve forgotten to add anything, it’s been over a month since I’ve started trying to get this to work.

Thank you so much for reading this pretty long post!

I am honestly unbelievably thankful for any and all help you have to offer!